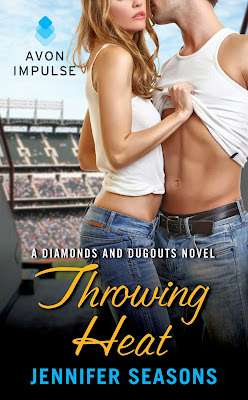 Blurb
Nightclub manager Leslie Cutter has never been one to back down from a bet. So when Peter Kowalskin, pitcher for the Denver Rush baseball team, bets her that she can’t keep her hands off of him, she’s not about to let the arrogant, sexy playboy win. Especially when the prize could put her business on the map. She’s got this in the bag, just so long as she can stay out of his arms…and his bed.
Peter struck out once before with Leslie, but this bet is sure to be the second chance he’s been waiting for. Determined to stoke the passion he knows is there, he’ll do anything to win - even if it means playing a little dirty.


But as things heat up, this combustible pair will have to decide just how much they’re willing to wager on one another…and on a future that just might last forever.

Author Guest Post:
I love dropping my characters into a whole lot of hot water and spending the entire story watching them get back out.  And that’s exactly what I did with Leslie Cutter in THROWING HEAT.  The story opens with her deep in a mess of the legal kind.  And from that moment on, her job is to clean up her life.  It’s a big task, but she’s up to the challenge.

How many of us can relate?  I know I can.  There have been periods in my life when I’ve looked around at the destruction and thought to myself, oh holy crap.
This is one of those moments for Leslie.  From the opening of THROWING HEAT:

As soon as her glass was full again she snatched it up. About to take a drink, she was stopped by the sound of a deep voice coming from right behind her left shoulder. “What’re you doing there, Leslie?”
Sliding her unsteady gaze to the left, Leslie snorted at the man who swung a heavy, muscle-bound leg over the bar stool next to her and sat down, the worn denim of his jeans stretching taut across his thighs.
“I’m celebrating, Peter.” She raised her glass and gave a grand wave. “Can’t you tell?”
Her brother’s teammate, Peter Kowalskin, surveyed her through impossibly pale blue eyes, his expression both amused and concerned. “I heard. Tough break, kid.”
“You don’t know anything about tough.” How could he? He was the Rush’s ace pitcher, and at the height of his career. Money, sex, cars, fame. She was sure he had it all. He certainly acted like it.
She, now, she had nothing.
“You might be surprised by what I know, princess.” Peter leaned forward and placed his elbows on the bar, the thin cotton of his white T-shirt pulling snug across his sculpted biceps. “How many drinks have you had?” His gaze was on the once-again empty snifter.
Bitterness washed over her. “Not nearly enough.” Was there even enough booze in the world to make her numb? Because that’s what she was going for. Numb. Then she wouldn’t have to feel anything.
Peter’s lips twitched a tiny little smile and her gaze zeroed in on his mouth. It looked hard and unforgiving. Squinting through the liquor, she raised a hand and tapped his lips with a finger. The unexpected heat and softness of them had her yanking it right back. “Why are you here? Mark was s’pose to be meeting me right in this bar after your game.” She made a big sweeping gesture. “Was it too much for him to take the elevator down here to the lounge?”
The ballplayer shrugged his shoulders, looking uncomfortable, and Leslie was mesmerized by the way the muscles rolled and flexed. Normally she wouldn’t consider him her type. He was too cocky, too crass. But her life as she knew it had gone up in a puff of smoke and she was feeling reckless.
Tomorrow she’d gather the shattered pieces and try to glue them back together along with her dignity. But for now she was just going to sit right there on the red leather stool in her good-girl navy blue suit and ogle his muscles. Every last one of them.
Why? Because she could, damn it. And because this morning as she’d walked into that courtroom she’d been absolutely sure she was never going to see the light of day again.
The sound of Peter clearing his throat drew her attention. “Your brother sent me instead. He’s been, um, detained.”
Leslie snorted again. She knew exactly what—or rather who—had detained him. No doubt she had legs up to her chin and breasts like over-full water balloons. “So I’m s’posed to thank you in his place?”
The only reason she was in the expensive hotel with its glittering chandeliers and pink fresco walls in the first place—instead of curled up at home with a box of macaroons and a whole lot of tissue—was to give her brother a giant hug for helping her out in her time of crisis.
Looked like she’d wasted her time.
The ballplayer chuckled. “You can thank me anytime you want.” The way he said it made giving thanks sound dirty.
Her gaze roamed over his body once again. Maybe she would thank him. Because dirty was good. It was distracting.
She just bet that Pete, with his badass looks and rock-hard body, could be one hell of a distraction.
Why not let him?
Spinning suddenly on her barstool, Leslie reached out and grabbed a handful of his white T-shirt, thoroughly enjoying the surprised look on his rugged face. Before he could open his mouth to speak she leaned off her stool and planted her lips full on his.
The zing of connection shocked her.
Sliding from the stool like water from a glass, Leslie let go of his shirt and wrapped both arms around his neck as she landed in his lap. She kissed him hard and deep, feeling the pain melt away with every passing second her lips were on his.
This was so much better than getting drunk.
Yanking back, Leslie took in his heated, intense expression. “You’ll do.”
His eyes narrowed. “Care to elaborate on that?”
Did she?
Nope. She was going to show him instead. That way she could ignore the hollow ache in the center of her chest for a few hours and pretend it didn’t exist. She could pretend she wasn’t on the verge of breaking down. “This is your one chance, Peter. Make it count.”
Buy Links
Amazon * Barnes&Noble * iTunes 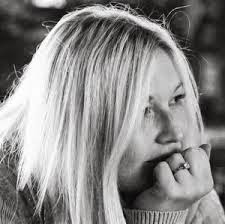 Author Info
Jennifer Seasons is a Colorado transplant. She lives with her husband and four children along the Front Range, where she enjoys breathtaking views of the mighty Rocky Mountains every day. A dog and two cats keep them company. When she's not writing, she loves spending time with her family outdoors, exploring her beautiful adopted home state.

a Rafflecopter giveaway
Posted by Book Mama at 6:00 AM 15 comments: