BOOK REVIEW - THE REST OF US 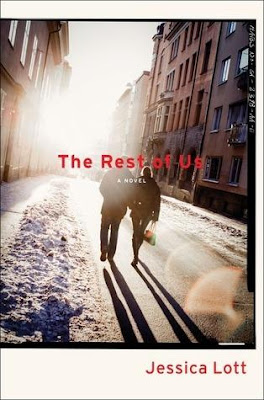 Like most writers, people-watching is one of my favorite hobbies, and I always find myself wondering about couples. The mismatched couples are the most thought-provoking – one is gorgeous while the other is just average; one is heavy while the other reed-thin; one is dressed to the nines while the other is a slob. And then there are those where one (usually the man) is near Social Security age, and the other (most often the woman) just got her first real fulltime job. Unlike those other couples, two people with a huge age gap between them will go through many different types of relationship dynamics if they stay together long term. They may have started out with the older partner dashing and confident; the younger one admiring and naïve; they may spend some time as equals, but eventually the younger will be taking care of the older.

In her novel The Rest of Us, Jessica Lott explores the relationship between an older man – Rhinehart -- and a younger woman – Terry -- at two different points in time. In flashbacks, they are together as a 20-year-old college student and 41-year-old poetry professor. She is 35 in current day as they are finding their way back to each other. No longer a needy, emotional 20-year-old, can Terry make the relationship work now that they are both adults?

The book opens with Rhinehart’s New York Times obituary. A Pulitzer-Prize winning poet, he earned a long one from the Gray Lady, and Terry is drawn back into 15-year-old memories when she reads it. But the obit was published in error, as Terry learns when she bumps into Rhinehart in a department store. Overwhelmed with emotion, the two have a tearful reunion, and Rhinehart invites Terry to a dinner party he and his wife, Laura, are throwing.

Although Terry had been a promising young photographer when they had been together, she no longer uses her camera to create art. Instead, she is gainfully – if barely – employed in a portrait studio, making just enough money to hang onto the Brooklyn apartment she once shared with Hallie, who is now married and living in New Jersey. Hallie had been around during Round 1 of Rhinehart and Terry’s relationship, and she warns her friend about getting involved with him again. But soon Rhinehart calls Terry (he refers to her as “Tatie”) and tells her that he and Laura have split, and would she like to have dinner? Rhinehart has given up on poetry;  his current obsession is with discovering his roots in Ukraine. As the relationship progresses, Terry finds herself picking up the camera once again. When Rhinehart visits Ukraine, Terry finds herself connecting with Laura over her photography.

The Rest of Us is a very well-written book, featuring characters who are concerned about art, photography, genealogy, poetry and philosophy. It’s a literary work more preoccupied with the protagonist’s interior life  -- the relationship with Rhinehart, her photography – than plot points. As such, the novel’s pacing is slow; perhaps too slow for readers who want a more active read. But the descriptions are lyrical, and the sections where Terry describes the process of photography are illuminating without seeming instructive.  Although the student/professor dynamic of their earlier relationship is mostly played out in the present tense, the novel still has a collegiate feel due to its literary concerns.

Still, the most important job for a novel about romance (even if it is not a traditional romance novel) is to create a love interest that readers find appealing. Readers should see exactly what the protagonist sees, and root for the two be together. Personally, I did not find Rhinehart to be worth the investment Terry makes in the relationship. While Terry grows on both a personal and professional level throughout the novel, Rhinehart spends most of the book self-centered and somewhat oblivious to Terry’s needs. But this is not surprising, considering he is a character who became involved with a 20-year-old when he was in his 40s.

The book’s ending is not surprising for anyone who is familiar with various art truisms. And it’s terribly abrupt, refusing to wrap up an important subplot. But the book provides an important service for any woman who once fantasized about dating her college English professor – an in-depth look at what those kinds of relationships entail, and how they evolve.

Jami Deise recently moved to St. Petersburg, FL after living her whole life in Maryland. After writing and trying to sell screenplays for the past ten years, she recently completed and self-published her first novel, Keeping Score (mom lit!). Now that her son Alex is headed off to college, Jami will have plenty of time for reading, writing, watching TV, and blogging (http://jamideise.blogspot.com/). She’s on Facebook and Twitter.