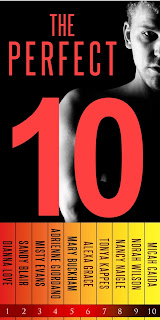 Whether you like to read mysteries, romance, young adult, women's fiction, or fantasy, this diverse group of bestselling authors have come together to bring you THE PERFECT TEN ~ Explosive suspense, powerful romance and loads of fun by 10 bestsellers!

Get all TEN award-winning books from
TEN bestselling authors for only $.99!

LAST CHANCE TO RUN, by New York Times bestseller Dianna Love
To an undercover agent, she’s a Person of Interest.  He’s interested. Escaping the compound of a deadly international felon—with a fortune in rare, stolen coins hidden on her body—elite athlete Angel Farentino has to make the most important run of her life. Literally. One step ahead of lethal men and dogs on her trail, she runs into the arms of a dark stranger willing to help her if she’d let him.  Between figuring out who’s sabotaging his undercover work for the DEA and trying to save his baby sister from herself, the last thing Zane Jackson needs is to get entangled with a woman who’s treading on the wrong side of the law.  But when the long-legged distraction races into the middle of his operation and stows away on his plane, a primal need to protect forces Zane to risk everything, starting with his heart.

THE LAIRD by USA Today bestseller Sandy Blair
Cursed on his death bed centuries ago, the laird of Castle Blackstone, Duncan MacDougall, wanders the echoing halls of his island-bound home as a ghost. Knowing only one woman has the power to set him free, he follows his castle’s newest mistress with great interest as she tours her inheritance for the first time. Could this plain, odd woman from across the sea be the one? Raised in the New York foster care system, street-wise catering director Beth Pudding isn’t easily frightened. But then she isn’t alone in her new home. A handsome specter with piercing blue eyes is following her every move as she evaluates the wisdom of keeping her inheritance, a decrepit island-bound castle. Who is he? And what does he want?

One year ago, rookie FBI agent Celina Davenport pulled off the ultimate undercover operation…she seduced Emilio Londano – the dangerous leader of the San Diego Mafia – and destroyed his illegal empire.

When Londano escapes a maximum security prison and begins picking off Celina’s friends and coworkers, everyone she knows becomes a target. Including DEA agent Cooper Harris, the man who once broke her heart and is now assigned to be her bodyguard.

How far will they go to stop him?

Cooper must risk his career – and his heart – to keep Celina alive. But will their past, with its forbidden passions and impulsive choices, put them directly in the killer’s crosshairs?

DOG COLLAR CRIME by USA Today bestseller Adrienne Giordano
Out of work and down on her luck, Lucie Rizzo is forced to move home to her nutty, mob-infested family. A move that also brings her back into the tempting arms of Frankie Falcone, the ex that never fails to make her heart sit up and beg.

When Lucie parlays her temporary dog-walking gig into a career making fancy dog accessories, she is thrown into an investigation that’s more Goodfellas than good doggie. One that could shatter her new life and her second chance at love.

INVISIBLE MAGIC by Amazon bestseller Mary Buckham
To save the innocent, Alex must call upon her untested abilities, but at what cost?
Hidden from a world unaware of magic, a recently and only partially trained group of operatives known as the Invisible Recruits are the only ones willing to stand between mankind and those powerful preternatural factions seeking to change the balance of power and gain world domination.

Alex Noziak, part witch/part shaman, anticipates facing dangerous preternaturals out for blood . . not fashion week. But when the rookie agent is sent undercover to find out who, or what, is behind a series of world-wide thefts of top-secret intelligence, Alex tangles with the Seekers.
Seekers hunt gifted human individuals like Alex and her squad whose rare powers can keep the balance between human and nonhuman squarely on the side of the humans. Her simple assignment turns into a battle of survival for everyone involved when she crosses Bran, a mysterious warlock, who might be her only ally or worst enemy.

Dr. Delano Bowen has searched over a century for a cure for his vampirism, as well as a vaccine to protect the vulnerable. At last, he thinks he’s found it in Ainsley Crawford, a descendent of the Merzettis, a family hunted to virtual extinction by vampires who feared the anti-vampirism properties in their blood. Ainsley has no idea of the genetic gift she carries, and Delano wants to keep it that way. With the lives of innocents at stake, he cannot gamble on her cooperation. But when his arch enemy sets out to destroy him and the fruits of his research, Ainsley is in grave peril. Delano must draw her closer to protect her. When attraction flares, hot and urgent, Ainsley sees no reason to resist it, but Delano knows she could literally be the death of him.

OUT OF FOCUS by Amazon bestseller Nancy Naigle
Kasey Phillips thinks her biggest problem is deciding whether to photograph Cody Tuggle’s honky-tonkin’ tour, until an accident on Route 58 claims the life of her husband.

In a desperate race against time as a hurricane threatens the eastern seaboard, they search for her three-year-old son who is missing from the wreckage.

A community and friends rally to help, but someone knows more than they are telling.

June Heal has nothing to lose when she relocates her homeopathic cure shop, A Dose of Darla, from the flea market booth in her home town, to a quaint shop in the cozy but unusual little town of Whispering Falls, Kentucky. Or so it seems.

Whispering Falls has a lot of secrets. From talking snow globes to whispering animals not to mention a few sprinkles of fairy dust, June realizes Whispering Falls is more magical than she thought. . .literally.

June discovers she was born into a family of psychics, and her homeopathic cures truly are magical. Unfortunately, they are not magical enough to save her from being the number one murder suspect when a member of the community that she had just had a disagreement with shows up face down in the lake with June’s lucky charm in the victim’s grasp.

Add to that an attraction to her high school best friend, Sheriff Oscar Park and Mr. Prince Charming, her cat, is stealing charms from Belle’s Baubles, June is forced to clear her name in more ways than murder. After all, they don’t have cauldrons in jail.

A Charming Crime is book one of the bestselling Magical Cures Mystery series. Come walk around Whispering Falls for a fun, fantasy mystery with magic and romance. You won't want to leave.

DEADLY RELATIONS by Amazon bestseller Alexa Grace
Detective Jennifer Brennan, still haunted by her abduction five years before, devotes her life to serve and protect others.  So when three young women go missing and are found murdered on her watch, she vows to find the killer — or die trying.

A personal relationship with her partner, Detective Blake Stone, would be career suicide. But the connection Jennifer has with him is nothing short of electric.  Working with Blake daily and denying her attraction is hard.  But when he moves in to protect her, resisting him becomes pure torture.
As they fight temptation, two detectives race against time to find the killer before he strikes again.  It is the most important case of their careers.  It could be their last.

Bonus Young Adult book: TIME TRAP by Amazon bestseller Micah Caida
Her memory is blank. Her future's in question. Her power is dangerous.

Waking up in an unknown world, Rayen learns only that she’s seventeen and is hunted by a sentient beast.  Terrified that she may never learn who she really is or find her way back to her home, she’s captured in a land that is at times familiar even if the people and the structures seem alien.  When local law enforcement delivers her to a private school, she’s labeled as a Native American runaway, and Rayen discovers a secret with deadly repercussions.  Forced into an unlikely alliance with a computer savvy street punk and a gifted oddball girl to save their world - and the future – Rayen finds the key to an identity that no girl would want and a strange seventeen-year-old boy who is as deadly as he is attractive.

Get all TEN award-winning books from TEN bestselling authors for only $.99~
AVAILABLE TODAY at the following links:
KINDLE ~ NOOK ~ KOBO ~ iTUNES