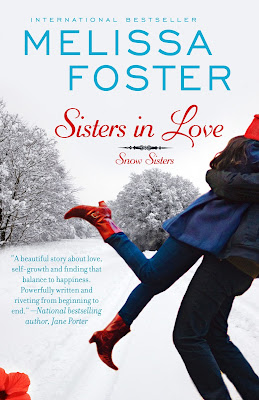 Sisters In Love
The Snow Sisters Series - Book One
By: Melissa Foster

Blurb
Danica Snow has always been the smart, practical, and appropriate sister.   As a therapist, she prides herself on making reasonable, conservative choices, even if a bit boring, and as part of the Big Sister Program, she has little time for anything more in her life.

Blake Carter is a player. He never gets bored of conquering women, and with his sexy good looks and successful lifestyle, he has no trouble finding willing participants. When his friend and business partner dies in a tragic accident, he suddenly, desperately, wants to change his ways. The problem is, he doesn’t know how to stop doing what he does best.

When Blake walks into Danica’s office, the attraction between them is white hot, but Danica isn't the type to give into the heat and risk her career. Danica’s desire sets her on a path of self-discovery, where she begins to question every decision she’s ever made. Just this once, Danica wants to indulge in the pleasures of life she’s been so willingly ignoring, but with her Little Sister in turmoil and her biological sister’s promiscuousness weighing heavily on her heart, she isn’t sure it’s the right time to set her desires free.

SISTERS IN LOVE is a light, uplifting work of women's fiction and will resonate with readers who enjoy emotional journeys of the heart with strong heroines and sexy, lovable heroes. Readers of books by Jane Porter and Beth Kendrick will enjoy Danica and Blake's story.

Blake Carter never had a problem getting women’s attention, but how he got Danica Snow’s was not in a typical way.  They were both in line at the café and waiting for what felt like forever.  When all of a sudden, Blake turned to look out the door and his elbow hit Danica in the face.  As she’s holding her bloody nose, she spies Blake checking out a blonde woman in the café.  ARE YOU SERIOUS?  I’m bleeding over here and he’s looking another woman up and down?  At least she’ll never have to see him again … or so she thought.

Danica is twenty nine years old and a successful therapist.  Most of her time is spent in professional clothing that one would not describe as sexy, but she enjoys her job and knows that she’s making a difference in the lives of others.  Her sister, Kaylie, is the complete opposite.  She’s two years younger, lives a carefree lifestyle and doesn’t feel the need to settle down with one guy.  When you’re young and pretty, you can afford to keep your options open.  Kaylie’s determined to get her sister to loosen up a bit and enjoy life.  But can Danica leave her work behind once she steps out of the office?  Or will her work continue to consume her and keep her from having any type of a social life?

Meanwhile, Blake’s world gets turned upside down when his best friend (and business partner), Dave, dies in a skiing accident.  He starts reevaluating his life and questioning some choices he’s made in the past.  He also finds out that he didn’t know Dave as well as he thought he did.  When secrets come out, he starts to wonder if he was really as good a friend to Dave as Dave was to him.


I fell in love with this book.  The characters felt so real and the story brought you through so many emotions.  One moment was steamy and the next had me close to tears.  The twists and turns had me on the edge of my seat wanting to know what was going to happen next.  The author does a great job captivating your attention from the first page and holding it tight throughout the book.  Overall, I really enjoyed reading Sisters in Love.  I’m excited that it’s the first book in a 9 book series and that I get to follow the Snow Sisters more in the books to come.

I'm honored to be featured today. Thank you, Marlene.

Where did you come up with the premise for Sisters in Love?
Most of my novels are are stories revolving around serious, gut-wrenching, heart-twisting dramas or tragedies. One of my friends in Cape Cod made a joke about writing something light and I took it to heart. Danica and Kaylie came to me while I was thinking about what direction I could go that would be a lighter, more fun read. While Sisters in Love is much lighter--and sexier--fare than my earlier work, it deals with serious life issues and has a substantial storyline, so I don't feel as though it's so far from my earlier work in the sense that the characters tackle important issues in their lives and they develop meaningful relationships. It's sort of like "Melissa Foster Lite...and Sexy"

Are any of your characters based on real people?
I think most writers will tell you that they pull attributes of many people into their "character pot" and then swirl it around a bit and come out with a whole new person. That's sort of how I work, and while the characters are not based on any one person, I can sometimes find a celebrity who looks just like what I envision my characters to look like. For example, I see our hero, Blake Carter, as a mix of Hugh Jackman and Patrick Dempsey with the romantic elements of Gerard Butler from P.S. I Love You. Need I say more?

What’s your go to snack when you’re writing?
>sigh< If you would have asked me a few weeks ago I'd have answered, chocolate, but I am eating healthier these days, so I'd have to say blueberries. I actually prefer not to eat while I write. It makes my fingers sticky and I'd rather write than eat...or sleep...or almost anything else...almost...

Sisters in Love is part of a bigger series called Love in Bloom, and Love in Bloom has two families within the series--the Snow Sisters and the Bradens. There are currently three Snow Sisters books and six Bradens books. In book two of the Snow Sisters (Sisters in Bloom) you will begin to meet the Bradens, six wealthy, incredibly sexy siblings who are looking for their forever loves. These are not kids' books. These books are about true, grown-up love, with heroes ranging in age from upper twenties to mid thirties. This series will keep me busy for a while. I expect to have all nine books published by May of 2014, with one book being released every 30 days. However, I'm a bit ahead of schedule, so watch for them. Sisters in Bloom has already been released.

On the surface Junie Olson’s life looks idyllic, from her handsome husband and beautiful daughter to her successful business, the bakery she always dreamed of opening. But in the past few months her world has slowly unraveled.  Her precocious child is withdrawing, showing unexplainable signs of emotional regression, a condition that frays the bonds of Junie’s once impenetrable marriage.  When her father dies suddenly of a heart attack, Junie packs up her daughter and goes home to help her mother.  Her homecoming stirs up memories of the nightmare she thought she had put behind her, the disappearance of her childhood friend, Ellen.  Haunted by recurring memories of what happened on that fateful day, Junie must gather the courage to revisit her past and untangle the secrets surrounding her missing friend, and the trauma that has caused her little girl to climb back into herself. As the pieces come together on the event that shook her small town, and at the risk of losing everyone she loves, Junie will question everything she thought she could rely on and everyone she thought she knew.

WHERE PETALS FALL is a gripping and emotional novel with an undercurrent of suspense, featuring a determined mother whose world slowly comes apart around her.  Where Petals Fall will appeal to fans of Lisa Scottoline's Save Me or Jodi Picoult's Salem Falls, who love an emotional and gripping read. They will root for Junie as they follow her transition into an indomitable heroine who must reconcile what she discovers about her husband and family’s tragic past, and find a way to put the pieces of her family back together and carry on. 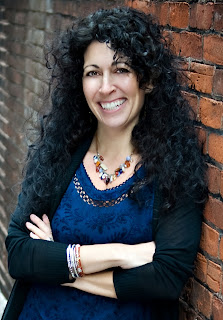 Melissa has generously offered to give 3 digital copies of
Sisters in Love to 3 lucky winners!
Open internationally!

a Rafflecopter giveaway
Posted by Book Mama at 7:21 AM 11 comments: