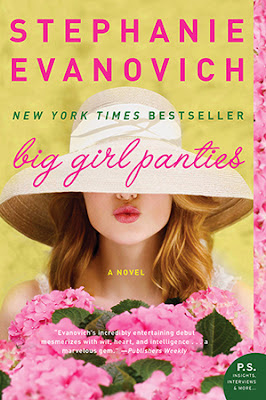 Blurb
In BIG GIRL PANTIES, Evanovich introduces readers to Holly Brennan—a 32-year old grieving widow in need of a change. Having spent too much time mired in sadness and grief-eating, Holly heads out of town to settle her husband’s estate and try to move on. Enter Logan Montgomery—a personal trainer to the country’s most famous professional athletes who also happens to be sitting next to her on the flight home.
Holly’s mortified by the way she’s squeezed into the airplane seat, but as they chat, Logan quickly realizes she has a sharp wit and keen insight—a welcome change from the sexy but superficial women he usually dates. When he impulsively offers to train her at his private gym, Holly surprises even herself and agrees.
Holly discovers she’s a natural athlete, and as her fitness level increases, so does a new found confidence. When Logan finally introduces Holly to his best friends, baseball superstar Chase Walker and his wife Amanda (a feisty curvy woman herself), they instantly see what Logan doesn’t; Holly is knockout. As their smoldering attraction starts to spark in earnest, Holly and Logan will have to decide if their love is for real…or just about looks.

After the untimely death of Holly’s husband, she finds solace in food.  Holly knows that she’s a big girl and doesn’t make any apologies for it.  Instead, she pokes fun at herself before anyone else can.  But when she is seated next to a man, whose looks rival a Greek God, he doesn’t fall for her self-insulting comments.  Instead he offers up his services.  As a personal trainer to professional athletes, Logan feels that he can help Holly get into shape and possibly even into feeling better about herself.  After all, he was kind of a jerk when they first met and he’s always loved the feel of taking on a new client and showing them their full potential.  What Logan didn’t expect was for Holly to be such a natural athlete.  So, when her body starts transforming it doesn’t take long for Logan to take notice.  With her snarky, sarcastic attitude and now a hot body to match, it was only time before their interaction went from the gym to the bedroom.  There’s no doubt that there is chemistry, but will the person she was when they first met hinder him from wanting to have a future with her?  After all, Logan’s in an industry where how you look is top priority.  Will he be able to look past the woman she once was and see the woman she now is?
Big Girl Panties has all of the aspects that I look for in a book … humor, romance, steamy love scenes and a great story!  I absolutely loved Holly’s character.  She is a riot.  Her comments and outlook on life had me laughing out loud.  And, although Logan seemed shallow at first, he redeems himself after a while.  And can we talk about the love scenes (fans self).  Whoa, there were some steamy one.  I loved this book.  I actually think it would make a great movie!  This book is a must read.  If you are anything like me, you will have it read in no time.  It was hard to put down and impossible not to love!

Author Info
Stephanie Evanovich is a full-fledged Jersey girl from Asbury Park who began writing fiction while waiting for her cues during countless community theater projects. She attended New York Conservatory for the Dramatic Arts and acted in several improvisational troupes and a few small-budget movies, all in preparation for the greatest job she ever had, raising her two sons. Now a full-time writer, she’s an avid sports fan who holds a black belt in tae kwon do.